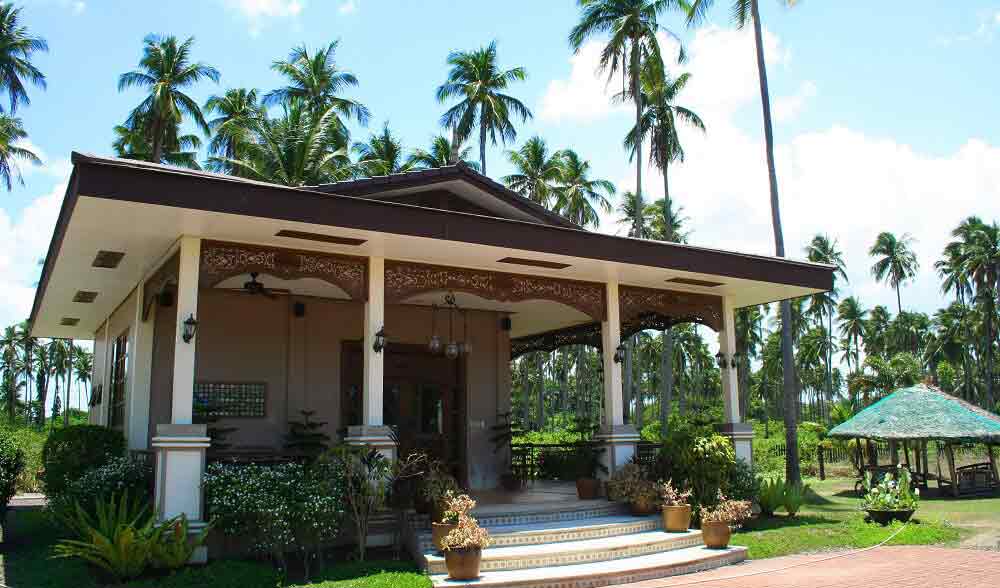 Set against the majestic mountains of Mt. Banahaw, Mt. Cristobal, and Mt. Makiling as its backdrop, The Hacienda Escudero Tiaong Quezon is filled with memories and rich cultural heritage that defines Tiaong, a fast growing town in Quezon province that is only 96km southeast of Manila.

This vast residential lot only development in Tiaong covers 180-hectare of rolling terrain surrounded by half-a-century-year-old coconut trees amid the wonders of nature and a village called Villa Escudero Plantations and Resorts. Developed and built by LandCo, in partnership with the Escudero family of Quezon province, the Hacienda Escudero is dressed up with legendary Filipino architecture and warm hospitality. With Villa Escudero on its side, homeowners are treated with a sumptuous meal under a waterfall on a special arrangement and experience a distinct lifestyle of ultimate adventure in a native setting within a short notice. The Villa also offers kayak rides on its natural lakes, nature trekking, fishing, walks in the hillside, and a great trip in a “caratela” (a carabao-drawn carriage) around the plantation.

The Hacienda Escudero Quezon is built in modernity amidst an old-world charm. It is part of an ancestral land developed as a coconut plantation in the beginning of the 1900s by the Escudero family from Quezon (formerly Tayabas). The project is specifically located along Km 91, Maharlika Highway (Pan-Philippine Highway), Brgy. Bulakin, Tiaong, Quezon Province. The town of Tiaong is the gateway to the rest of the province’s other historic towns and cities and the entry point to the Bicol Region. The Hacienda lies near Tiaong’s boundary with San Pablo City, Laguna. The Villa Escudero covers 800 hectares of mostly coconut plantation and shared boundaries with Tiaong, San Pablo City, and Dolores, Quezon. Hacienda Escudero takes its residents back to a more meaningful way of life, but quite simple and more relaxed. The residential development merges Filipino culture in every facet of living while allowing all the present-day amenities and facilities needed to ensure a laidback lifestyle.

The LandCo Hacienda Escudero is a lot only residential development in Tiaong offering prime lot cuts mostly enclosed by the rivers Bulakin and Labasin, two major tributaries in the town that supply water to Villa Escudero’s famed waterfalls. The Hacienda Escudero offers plantation lots and lakeside lots that are all ready for building a grand house of your own or as a garden or farm lot where you could pursue your hobby and live close to nature. The site is easily accessible from Manila via SLEX, passing through Alabang and exits in Calamba (Turbina), straight through Sto. Tomas, Batangas and San Pablo City via the Maharlika Highway. The site’s entrance gate is just 20 meters from the welcome arch of the San Pablo- Tiaong boundary. While the town of Candelaria, another progressive town in Quezon, is next to Tiaong. From Manila to the Hacienda, the trip usually takes less than 2 hours.

Looking for 24 7 chat support for your business websites ? We suggest Chat Agents.

LandCo Hacienda Escudero in Quezon City, Philippines is a premier House & Lot project available for sale. If you're looking to rent or purchase Hacienda Escudero, then check here first. We have full details of Hacienda Escudero updated regularly as well as everything you need to know about the availing and booking process, broken down into stages that includes selecting a unit, choosing a payment plan and buying your dream home at the right price. For price list, free site tripping or showroom visit, personalized service, model house, unit plans, floor plans, payment terms, CHAT LIVE with an agent 24x7. Always only buy from PRC licensed Real Estate Brokers and Agents.

Why Invest In  Hacienda Escudero

Owning a lot in this historic ancestral land will take you back in time. The Hacienda Escudero is the only type of residential developments in the country that is still surrounded by coconut trees, and yet with modern and world-class amenities, and three mountains in the background, and with a resort village as a neighbor that is a regular tourist destination any time of the year. This kind of residential community is truly rare!

Proximity to Manila and other workplaces

This lot only package in Tiaong is really amazing and could make you more comfortable to live. The fresh air and its cool breeze are very conducive to the entire family. The LandCo Hacienda Escudero’s proximity to Manila makes it a more convenient place to raise a family while you work from the metro or any other workplace that is near the site. The project is only a little over an hour drive to Alabang and other Laguna cities where there are various industrial estates (Calamba, Sta. Rosa, and Biñan). if you are a retiree, this is the perfect place for you and your spouse. You can settle here and enjoy the life of a busy retiree when you can pursue a great career in lot farming or gardening, this will make you more healthy and alive!

Near schools and other establishments

The Hacienda Escudero is also near all of the life’s basics essentials. The Southern Luzon State University Tiaong Campus is less than 3 km from the site. Other schools that are near the site include Enverga University Candelaria, St. Anne College Lucena, Canossa College San Pablo, San Pablo Colleges, The Lady Mediatrix Institute, Inc. Candelaria, and Tayabas Western Academy Candelaria, among others. The SM City Lucena, SM City San Pablo, City Mall Tiaong, and Ongville Shopping Complex Candelaria, are all near the site. For your medical needs, there are several hospitals and clinics near the Hacienda, among of them are the Peter Paul Medical Center of Candelaria, Inc., the Community Hospital and Medical Center San Pablo City, Liwag Medical Clinic Tiaong, SPC General Hospital, and Lucena United Doctors Hospital, to name just a few.